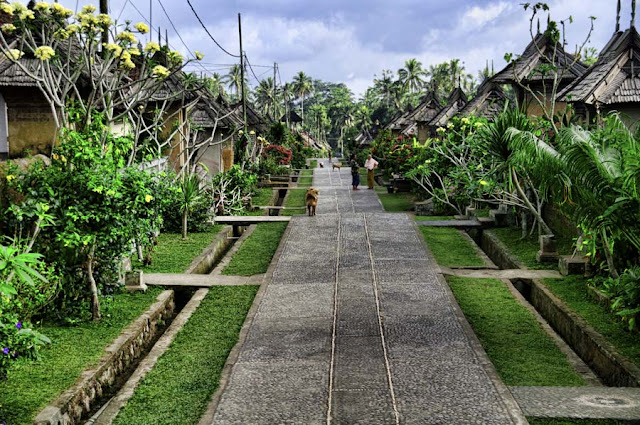 Penglipuran Village, indigenous village of Bali which is very thick with their harmony and togetherness. The village is located in the village camp, Bangli district, Bangli-Bali district. This village has been awarded Kalpataru award.

Kalpataru is an award given to individuals or groups for their services in preserving the environment in Indonesia. Kalpataru itself is Sanskrit meaning tree of life (Kalpavriksha).

Besides earning the Kalpataru award, Penglipuran village was also designated as a tourist village by the Bangli regency government in 1995. Since then, the village has been increasingly visited by tourists who want to know how the wisdom that happened in this Penglipuran village.

According to the surrounding community, the word Penglipuran is taken from the word Pengeling Pura which means the sacred place meant to commemorate the ancestors.

Discussing his ancestors, it turns out the people who live in this village are very high mandate of their ancestors. Evident from the formation of Penglipuran village highly prioritize this harmony. 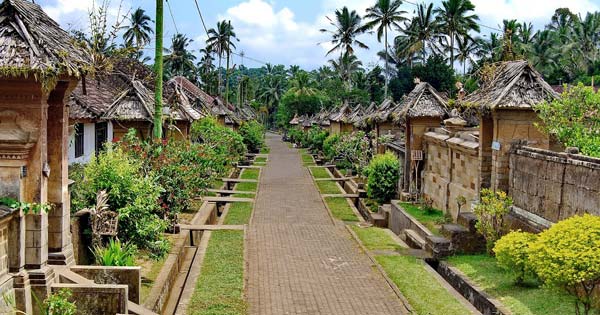 This uniqueness makes the village of Penglipuran very beautiful with a very neat symmetry arranged between 1 house with other house.

The gates in each house facing each other are only limited by the small main road in the middle. This gate is called Angkul-angkul (typical gate of Bali) which also has the same architecture with the angkul-angkul every house in this village.

The main road in the village of Penglipuran leads to the main part of the village which is at the highest peak.

The beauty of Penglipuran Village

First you enter the area of this village, you will be served a very cool and fresh atmosphere, it is because the area is located 700 meters above sea level.

In addition, the village is cool due to the absence of pollution caused by motor vehicles in the Penglipuran village area.

The whole village is about 112 hectares, not too tired if you walk through this village on foot while enjoying the beauty around the Penglipuran village. 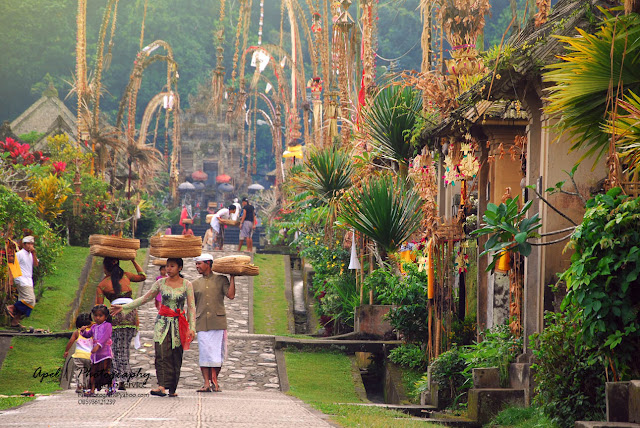 In the vicinity of the village entrance gate is an area called Catus Pata which is an area consisting of village hall, community facilities, and green open spaces nan park beautiful

In the vicinity of this main road, you will not find scattered rubbish that pollutes this place many trees that are growing around the road.

Quite the contrary, these streets are clean aid. So if you want to keep trash in this area, think a thousand times to do.

In addition, in every corner of this village there will be a lot of garbage provided to accommodate garbage.

Galungan holiday is a big Hindu religious holiday in Bali which is commemorated every 6 months. At that day, you will see the jail of penjor (means of hindu pak bamboo long tried its end that likes and plugged in front of the yard of the house) that weld every house in this village.

There will be bali girls dressed in Balinese customs who bring banten to the temple.

The physical arrangement of this village has been handed down from generation to generation by their ancestors, the people of Penglipuran village are always full of Balinese philosophy called Tri Hitakarana 'falsafas.

This philosophy requires us to always harmonize the relationship between man and his neighbor, man with environment and man with god. 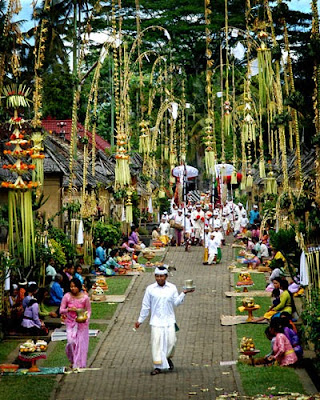 Besides having a culture of respect for nature, Penglipuran Bangli villagers also have cultures and traditions to respect women.

Due to the existence of village rules that forbid men to do polygamy, if caught doing polygamy then will get the punishment ostracized from the village.

The village also has a culture of punishment for theft. For those caught stealing, will be punished to give offerings of five chickens with different color of chicken feathers in their 4 ancestral temples.

In this way, all villagers will know who steals, will certainly create a shame effect.

The last or third zone is called setra or grave. Although the villagers of Penglipuran Bali embraced Hinduism but Penglipuran Bangli villagers did not know the cremation ceremony, so the corpses were buried.

Penglipuran Bali villagers have a special drink called loloh cemceman, this drink has a taste like water tape and has a green color because the basic ingredients are the juice of cemceman leaves.